Walk Where She Walked, Touch What She Touched

Posted on June 19, 2014 By jenniferaoconnell

said the monitor at Oslo International, and I cursed in every language I knew and wished I had read that before I missed my flight to Helsinki.  My 7-hour layover had turned into a 12-hour layover and it was mostly my fault.  Lost in an article about Petronella, I had been sitting at the gate with my back to the boarding desk, waiting for an announcement over the loudspeaker.  I learned later that when the screen by the door displays the word “boarding,” everyone quietly lines up and gets on the plane.

I emailed my friend Tuukka, who was picking me up at the airport.  “Pfft, Oslo airport, I didn’t know they do it like that…” was his response, which I took to mean, “Pfft, Norwegians!”  (From what I gather, there is a friendly rivalry between Sweden, Norway, and Finland…I have met citizens from each who like to poke fun at the others.)

After cleaning an exploded pen out of my bag and accepting that I wouldn’t be leaving Norway for another four hours, I went to find food.  A small sandwich costs about $25 U.S. dollars in the Oslo Airport, so on principle I bought a $12 beer and drank that for dinner instead.

Do my adventure pants really make me better at adventuring, or do they just create unnecessary trouble?

Feeling slightly hungry but a little more like myself, I boarded a plane (which was 20 minutes delayed) to Stockholm, Sweden.  We touched down with 10 minutes for me to find my gate, and the captain announced that there was a problem with the jet bridge, and we would have to wait for a set of stairs to be towed over.  I dashed down those stairs and through the airport in just enough time to board my flight to Helsinki and fly off into the midnight sunset. 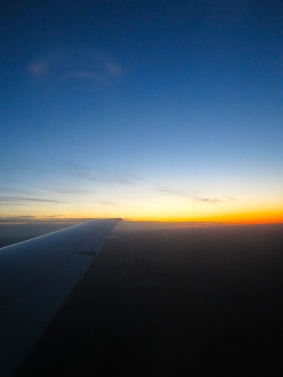 No, really. This is what the sky looked like at midnight.

At 12:25am, safely on Finnish soil, I learned my luggage had been left in Oslo (“but they had 12 hours!” I exclaimed to the lady at the counter, who smiled and handed me a slip of paper), and ran out of the gate to meet Tuukka.

My First Taste of Finnish Hospitality

Tuukka and I arrived at his house around 1:30 in the morning.  I expected his parents to be long asleep, but the lights flicked on and his mother, Eija, flung open the door and rushed out to throw her arms around me.  Hannu, his father, poured glasses of champagne and I struggled to recall what my cousin Chelsea had told me about remembering the Finnish word for “cheers!” (“Dead cat…catnip…cat piss!  KIPPIS!”  My Finnish needs some work.)  They led me to the kitchen, where we ate a 3-course salmon dinner at 2am, and then Eija handed me her own fluffy pink bathrobe and insisted I take a sauna.  When I finally sank into bed at 3:30, I laid awake for a while wondering at the kindness of strangers.

People, Places, and Adventure Pants for the Ambassador

I thought I understood how much this legend means to the people it has touched, but now I see I had no idea.  The past two days have been peppered with media interviews like this one, and it shows no sign of letting up.  Interesting people have been seeking me out to help, like Arnold Pieterse, translator of Mauno J. Pyhtilä’s book about Petronella’s journey,  and Peter Starmans, chairman of the Finnish-Dutch society.

Today, in an event I have been looking forward to for a while, I had coffee at headquarters of the Dutch Ambassador to Finland.  I was both honored that the embassy has taken such an interest in my story and slightly disappointed, as the Ambassador got pulled away on “urgent business” and wasn’t able to join.  Still, we were graciously received by Counsellor Hans Kruishoop and Ilona, the Public Diplomacy Officer.  I presented them with some San Francisco Blue Bottle coffee, sugared almonds, and of course – Adventure Pants for the Ambassador.

And as luck would have it, I met the Ambassador himself on the stairs as we left!

He’s got a shiny orange surprise waiting for him…

He rides his bike to work, and seems like a pretty awesome guy.  I hope we get a chance to meet again in October.

My favorite part by far has been finding clues and discovering places in Helsinki that Petronella visited.  I’ll stand on a spiral staircase that she walked and feel a slow, significant, indescribable tingling in my spine like something important.  I’ll run my fingers over elevator buttons she might have touched, and feel the inside of my stomach twist into knots.  I have caught myself on more than one occasion simply forgetting to breathe.

She sat in the newspaper room of the historical Hotel Kämp to read her daily paper.

(That room is now a storage closet, but I made them show me anyway.)

She stayed at the Hotel Andrea, which now is a bank and Apple Store Headquarters.

Hotel Andrea may be gone, but the old staircase still exists.

I am only two days into my journey, but I feel like I have been here for two weeks.  You could say I have become obsessed, but not entirely with digging up information.  All I find myself wanting to do is walk where she walked, touch what she touched, and let my curiosity set me on fire.

5 Comments on “Walk Where She Walked, Touch What She Touched”