Posted on October 13, 2014 By jenniferaoconnell

It is somewhere way deep down in the morning before the light, and I am awake.  I am awake because I can’t figu 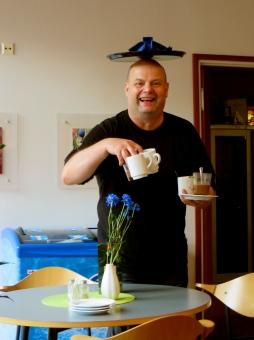 re out how to say goodbye.

I came to Finland with the hope of being more than a tourist.  I wanted to slow down and settle in, to stay long enough to allow the people and the place to sink into my skin.  I have written about the major triumphs and pitfalls of my journey: challenges with the media, Solange’s secret visit to Lapland, scattering Petronella’s ashes on the fjelds, Annukka and our 115+km hike to Lemmenjoki.  But the people and the land don’t necessarily live in these stories – they live in the small things, the things that don’t always seem big or important.

When it rains in Inari, I call Tytti and tell her we are making pancakes.  She says “hm-hm” in a singsong way and we wrap ourselves into blankets on her big orange couch and watch bad television until we feel guilty for how long we’ve been watching and how much we’ve secretly enjoyed it.  Juse at the Sarrit Cafe moans about the weather while serving mushroom soup, and does the dishes while balancing a tray on his head to make me laugh.  The falling leaves smell like earth and decay, and the river is swollen with water.

When we go out at night, it’s always an adventure.  Sometimes the line is too long, and I convince Tytti to hop the back fence.  We find the only West African men in Kultahovi, who repeat the two English phrases they know best: “Thank you!  I love you!  Thank you!  I love you!”  Tytti manages to look happy and uncomfortable at the same time, and I dance so hard I forget that everyone in town knows who I am and is probably judging me.  “She’s my type,” the 4’11” reindeer herder says in Finnish, nodding to me in my chair at Papanas Bar.  “Wait till I stand up,” I say.   Anne-Marie runs dancing interference with her disarming smile and perky moves, Mullis does the muppet dance and knocks the pictures off the walls, and when the military band is in town from Rovaniemi,  The Only Trumpet-Playing Santa in the Finnish Military Band uses that as his pickup line.

When the great sadness of life is too much to hold, I watch friends drown themselves in Koskenkorva and Karhu.  Their eyes go glassy as they try to forget why they drink, and excuses roll off their tongues like tumbleweeds: “There’s too much freedom here,” “I have nothing else to do,” “my marriage,” “my job,” “the government,” “women!” “it’s the Finnish way.”  I picture the months to come, how it will be dark and cold with an hour or two of sunlight per day.  My heart twists a little in fear – for them, but even more for the loved ones they might lose.

When I travel south to Tankavaara, we roast makkara around the campfire until they spit grease.  Casper, Heli and Jenni gather mushrooms, Tapio talks excitedly about rocks, and Matti spouts gold history.  Seppo Mauno asks me to marry him, Marko and Sami manipulate the music and pour the drinks until everyone is buzzing and happy, and we get the locals in the pub to chant with us, the new Lemmenjoki anthem: “MUSTIKKA, MUSTIKKA!”  Sometimes if I’m lucky, Tiina, the famous Sami singer from Vuotso invites me up for a duet.  We belt out Adele’s “Someone Like You” together, and everyone is silent.  A reindeer named Stinky wanders the grounds, and it is completely normal to wear your Lappish hunting knife on your belt.  You come as you are.

When I see a pile of rusted metal in the forest, Hanna explains that it is left over from World War II.  She reminds me that Finland in unhappy proximity was tossed around like a rag doll between Russia and Germany, and that German soldiers were ordered to burn Lapland to the ground as they left.  I listen as old ones speak of the war with something like contempt.  It is still so clear, so close.

When I need a change of scenery, I drive to Norway with Tytti, or to the Russian border with Hanna.  When I need to return to the water, I kayak the Ivalojoki with Vesa, Venla, Jouni, Janne, and Hetti the dog.  When I want to go home, I go to Lemmenjoki.

The day I first arrived, I came up the Lemmenjoki River on a boat with the band Jaako Laitinen ja Väärä Raha.  I was nervous.  Really nervous.  I didn’t yet know if Solange was coming and bringing her mother’s ashes – hell, I didn’t even know as much as I’d hoped I would about Petronella’s life.  I had nothing but my own damn self and the choice that had brought me here.  My brain seemed to echo the same question over and over again: Am I enough?  Am I enough?  Am I enough? 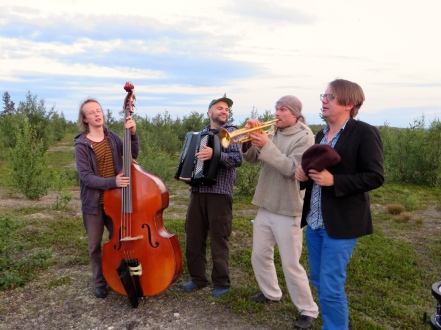 The band and I were received with hugs and fanfare and polite curiosity, followed by a sauna and a beer, followed by a jam session under the midnight sun, followed by a giant celebration in the middle of the wilderness.  Sunday, Ilkka took me on an ATV tour to meet all of the Miessi River gold miners and we stopped for lunch at Antti Kohtamäki’s claim.  “Do you want to see my gold?” Antti asked, and dumped a box full of gold nuggets in tiny ziploc bags on the table.  He picked up one of the nuggets, said something in Finnish, and everyone burst out laughing.  Antti turned to me.  “It looks like a dick,” he said, and handed it to me. “For you.”  Gold miner humor.  I thought hard about whether to slap him or thank him.
“For me?” I said.  “I couldn’t…”
“A golden dick…like your boyfriend!” he continued.  They laughed harder.  I examined the nugget in my hand.  It did unmistakably resemble a male body part.
“No,” I said, and gave him a smile and a wink. “It’s much too small.”
There was a pause, and then a roar of laughter.  I could see Antti working it out in his mind.  From that moment on, it seemed like they had decided I could hang.  I was one of them.

Some days in Lemmenjoki I was alone, without another human in sight.  I wandered the fjelds and wrote and felt half crazy, but not in a bad way.  I wrote for clarity, for survival, for love, for yearning.  I wrote because there was nothing else to do.  I wrote even though there was everything else to do.  I let the land settle on my soul.  But Lemmenjoki is also a place of human stories and living legends, of strange, interesting, colorful characters, and most of all I lived for the days when I got to be with them.

There’s Tintti, who drives his boat like art, and spicy Marge who runs Ahkun Tupa.  Anne-Marie dances like the wind and fills the room with her laughter.  Pekka Itkonen loves motors and machines and Piipa loves mushrooms and berries and cries when the baby birds leave, and somehow they have built a life together.  Mullis takes you off guard with his worldly stories and off-color sense of humor, and Ilkka waxes on about the simple life.  Aki shovels dirt in a pit with abandon (out of everyone I always hope he’ll find the biggest nugget, though he hasn’t yet), and then teaches us to gut and skin ptarmigan with gentle hands and utmost care.  Topi the Hopeless, who I re-named Topi the Topless after successfully convincing him to take his shirt off, drinks and shouts and flies planes and loses his ATV in the forest for 2 weeks when he tries to drive it to Norway.  The three Telilä men are each captivating in their own way – old Risto’s boyish, mischievous sense of humor, Mika’s attention to detail and care for the people around him peppered with a tiny bit of sarcasm, and Ami’s somehow guarded yet open heart and smile, which isn’t one you forget easily.    Pirjo and Jouko surround their daughter Vilma with love and fire and humor, and Vilma teaches me Finnish and how to jump over trashcans with a hobby horse.   Sweet Tytti, who gave up a high-paying job to follow her calling as a silversmith, takes pictures and tries to keep to the edges but everyone knows she is quite in the middle of things, noticing and holding everyone together.  Jukka’s eyes fill with tears when he talks about the new law which will close down the Lemmenjoki gold mines in 8 years, and it is easy to see how much this place means to him.  It’s easy to see how much this place means to everyone – rascals, jokesters, daughters, grandfathers, liars, lunatics, caretakers, drunkards, artists, swindlers, lovers, heroes, all.

On my way out of Lemmenjoki, a tourist from Helsinki inquired what I had learned about Petronella.  “So what did you find? Is she a crook?” he asked.  I paused.  Petronella and I have had an interesting relationship.  Sometimes I felt intensely connected to her, as if we shared the same soul.  Sometimes I felt angry at the web of confusion and mystery she left in her wake.  Sometimes I wondered if it was really her I was following, or just the echoes of my own heart.  But in the end she was there on the fjelds, keeping me grounded, leading me onto something I don’t know but will probably be big and scary and hard and has the potential of failure and heartbreak but will without a doubt be worth it if I make it through to the beauty and fullness on the other side.  I took a breath, and I answered him.

“I have found that Petronella is whatever people need her to be,” I said.  “She is a crook, a trickster, a heroine, a temptress, a woman, a mother, a legend.  So am I.  So are you.”  He smiled and raised his eyebrows, surprised but satisfied.  “Humans are complicated,” I said.

To my Lemmenjoki friends and all the people I have met along the way, though it will never be enough: kiitos.  I will wear my golden you-know-what with pride, and remember.  I will return.

To my friends back home: when you ask me how my journey was, don’t believe what I tell you.  There’s no way I’ll truly be able to say it in its entirety until it is written.

Petronella and I, we’re all of it.  So are you.  We’re complicated.  I hope that when I am finished, you will see us as the humans we are, beautiful in our complexity.  Maybe you will view yourself in the same way, beautiful in your own.

2 Comments on “Swindlers, lovers, heroes, all.”