Posted on February 15, 2014 By jenniferaoconnell

If you have ever traveled with me on public transportation, you know what happens.  I’ll climb on board, greet the bus driver, and try to inauspiciously find a seat.  Fighting the rising curious urge to look around, I will look at my shoes instead, screwing my expression into the “Don’t-Talk-To-Me-Face” I have been trying to master for this very moment.

Despite my best efforts, they will find me.  The woman in a wheelchair with the tic will ask me for a pencil and when I tell her I don’t have one, she will tell me her life story.  The strung-out man in the tye-dye shirt will stand in front of me, echoing the electronic bus instructions at me as if they were sexual innuendos.  This has been happening for as long as I can remember riding the bus.  Schizophrenic Pete on Route 12 once asked me if I had seen the new Hillary Duff movie, told me about the women chasing him through the mall with wash bins, and then asked me on a date.  Jerry Garcia’s alleged grandson on Route 101 announced that tickets to his show were thirty-five dollars and then asked me for my name. “JENNY?  Did you know there’s a song about you?  How does it go…EIGHT!  ONE!  ONE!  FOUR!  NINE!  FIVE!  SEEEEVEN!”  I have spent time in front of the mirror trying to contort my face into an angry grimace, but like a dog can sense fear, my crazy bus friends can sense that my expression isn’t genuine.   The other passengers look on with an amused smile and their eyes say “sucks to be you!” until, heart beating faster than I’d prefer, I exit the bus and promise myself that next time I will foam at the mouth and pretend I have rabies – if I can out-crazy them, maybe they’ll decide I’m not worth it.

But every once in a while, my failure to be unapproachable ends in something wonderful.

Last June, on the 47 bus up Van Ness, I tried for 20 minutes to refuse a man who was desperately trying to give me a birthday card.

“I bought this card by accident,” he said, “I want you to have it.”
“It’s not my birthday.”
“I’m sure you have more friends with birthdays coming up than I do.  The only one I have is mine on July 17th, and I can’t send it to myself.”
“I don’t need a birthday card.”
“In Hawaii, it is considered very rude to refuse a gift that is offered to you.  The Volcano Goddess gets mad.”
“Well in Ghana, it is considered polite to refuse.  I really don’t want your birthday card.”
“Girl, I’m a retired veteran.  I’m living on Buchanan in temporary housing.  Just take the damn card!”

I really looked at him then.  He was African American, skinny as all hell, and wore a black leather jacket with a white undershirt.  Laugh lines at the corners of his eyes scarcely masked the tired worry underneath, and I wondered how many times he rode the bus just to talk to someone.   Alarmingly, I recognized something in him that I also saw in myself.  Suddenly, I had an idea.

“Write your address on the envelope,” I said.  “I’ll send it to you on the 17th.”
Relief flooded his face.  “Girl, I knew you were a good one,” he said.  “You keep tryin’ to make your face look hard, but you can just tell by lookin’ at you, you got a good soul.”  I handed him a pen, and he scrawled his address in big blue letters on the envelope.

Just before July 17th, I sent him this card (click to read it): 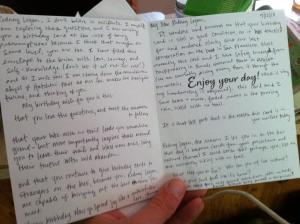 Yesterday in a Sacramento coffee shop, this homeless man approached me.  He asked me to help him write a valentine to a woman he sees every day at her work near the street corner where he lives.  He told me about how she found him on Thanksgiving when he was drunk, but treated him kindly and without judgement, and how she always smiles back.  He said he loved her because of her kind understanding, and the way her beauty – sans makeup – lights up the world around her.  He said she makes him so nervous he can’t approach her without a few drinks in him.  I gave him a piece of paper, and we got to work.  Then I bought him a coffee, told him it was the only drink he needed that day, and sent him off to give it to her.

Thank you, Rodney Logan from the 47 bus.  Thank you, Jordan Jones from the corner of 14th and G street.  If I do nothing else as a writer, meeting you makes me feel like I succeeded.  Thank you for reminding me how beautiful and unexpected the human heart can be.  We are capable of so much.

2 Comments on “Letters With Strangers”